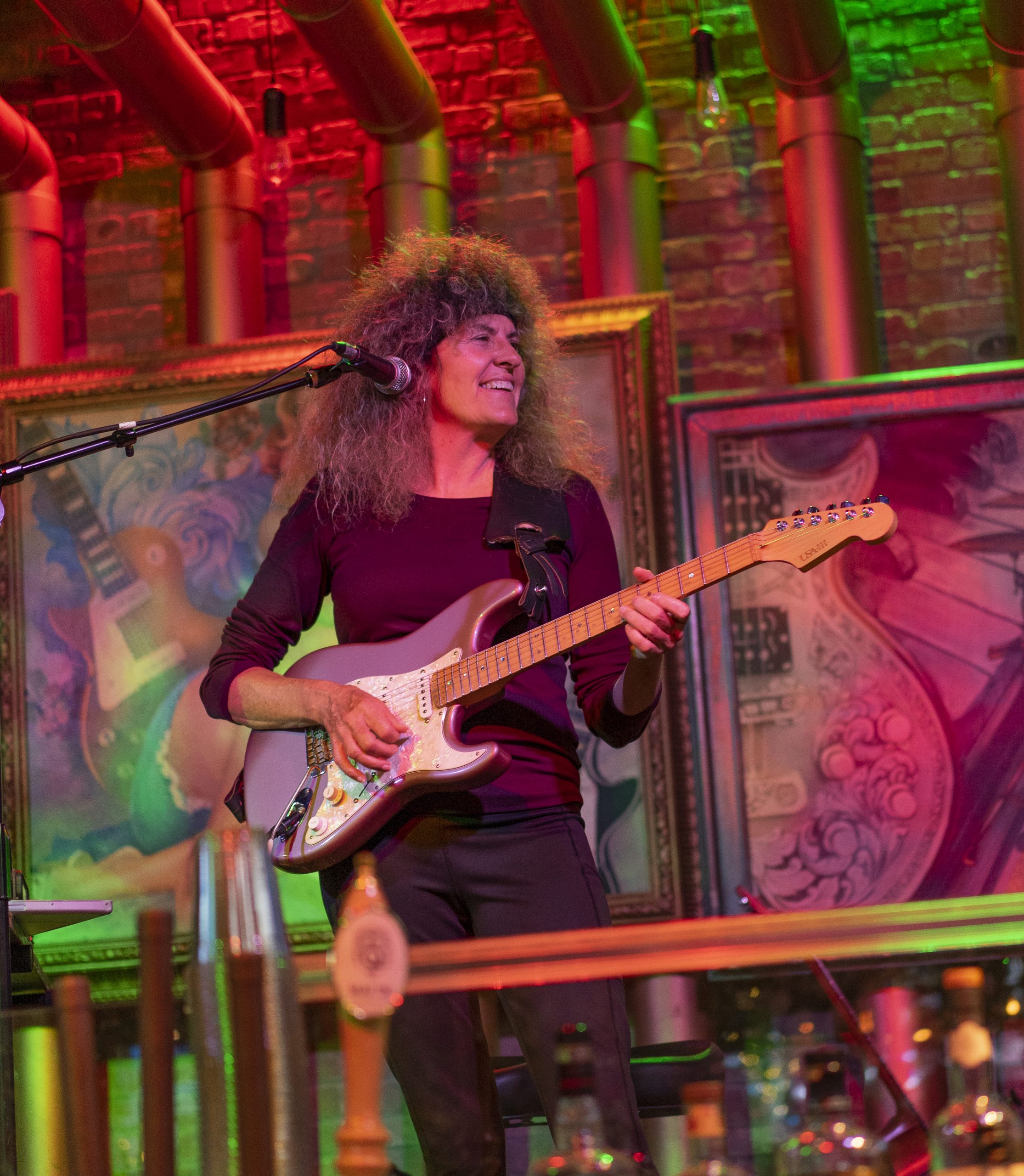 Described as “the most awesome Female rock guitarist…ever!” this is simply an understatement – Teresa Russell is one of the best guitarists out there: male or female. She has performed all over the world and has shared the stage with guitar rockers such as Kenny Wayne Shepherd, Johnny Winter, Carl Palmer, Walter Trout, Carl Verheyen, Corby Yates and others.

Teresa, is the only female to ever qualify” in the top eight” for the national finals in the Rock & Roll Hall of Fame/Guitar Center’s lead guitar competition, Guitarmageddon. Competing with over 2000 guitarists across the country, she accomplished this by winning the West regional in Los Angeles where she received “out-of-seat-thumbs-up” kudos from such Grammy award, celebrity judges/guitarists as Steve Lukather (Toto) and Steve Stevens (Billy Idol).

Teresa started guitar lessons at age 7. She was playing teen halls, high schools and navy bases by age 9. At age 12, she was playing on the Sunset Strip in Hollywood. With guitar influences such as Hendrix and Clapton, she rocked regularly at Gazzari’s and the Whiskey. Numerous tours TV and film appearances followed.

After attending Northridge University on a guitar scholarship, she hit the road to continue seasoning her rock chops in countless roadhouse bars throughout the western U.S. She later formed an all-female rock band and performed for several years on the Las Vegas, Reno and Lake Tahoe circuits.

After touring all over the world with Helen Reddy throughout the 80’s, Teresa decided to pursue projects of her own. She focused on her blues-rock roots with an aggressive style establishing a wide-spread fan base throughout southern California.

As a song writer, arranger, programmer and producer, Teresa has produced several CD’s with her bands TR & Cocobilli (blues/rock), Acadiana (cajun/zydeco ) as well as some jazz with her mom. Teresa continues to deliver electrifying performances featuring raging guitar solos with a vocal style that has been compared to such divas as Janis Joplin, Melissa Etheridge, and Bonnie Raitt. Teresa can be seen performing regularly throughout Southern California.

Contact Teresa
Note of Thanks: I’m so grateful that my parents gave me the musical support I needed when I made up my mind at seven years old that I was gonna be a rockstar! Most parents would try to guide their children in a different direction. I’m grateful for the support of my family, sis and brother-in-law. They all help me jumpstart my career a few times before things finally kicked in. I’m grateful for all the musicians who have come into my life who have been inspirations, teachers, collaborators and friends. I am grateful for my community of friends and music lovers, longtime clients, club owners and restaurateurs who continue to support this musical project. What an adventure it’s been so far!!!

Love and thanks to you all.